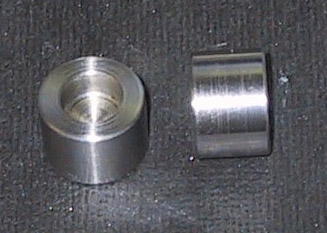 The reason is mysterious but it seems one of the first things to give any trouble on Vulcan 1500/1600 engines is the cam chain tensioner. That's the spring loaded gizmo that keeps an idler pressed against the chain so it doesn't whip or come off the sprocket or even make nasty grinding noises as it stretches through normal use.

At some point though the tensioner reaches the end of its travel and then, when the chain stretches just a little more it starts rattling, usually against the spark plug tunnels (tubes) causing the damage shown at right. The chain can eventually wear a hole in those tunnels which then fill (slowly) with oil and suddenly the rider notices oil seeping down the side of one cylinder.

This particular page and fix actually seems to have created more paranoia than comfort among many Vulcan owners with many suspecting every odd noise might be caused by a loose cam chain so again, if you have a tap or a knock it isn't the cam chain. If you hear a buzzing or slapping sound (remember when your chain was too loose on a bicycle or the drive chain on your old dirt bike) then 'maybe' the extenders have reached their limit.

This procedure will give new life to the extender so you don't have to tear down the entire engine to replace a chain. The part is available through:

Before ordering the extender, there is a way to check the cam chain tensioner without removing the entire tensioner and having to reset everything.

Remove the cap slowly so everything comes apart together in one piece. Be sure to reinstall parts in the exact order they came out.

When the cap/springs/etc. are removed, the extender rod will be somewhere in the following range:

At full retraction, the rod end will stick above the end of the threaded body by +0.342".

Note the rod shown in the picture at left is down 'inside' the threaded body by a quarter inch. With only about 1/16" left it's time for replacement.

If measured on the bike, the tensioner body does NOT have to come off, nor do you need to reset the rod, per factory instructions. If you remove the body, then everything must be re-set according to Kaw's instructions.

If you've decided you 'do' need the extender keep on reading. If not put the cap back on the tensioner (making sure you replace the other parts in their proper places) and go ride.

WARNING
Failure to install properly can, and likely will, cause considerable damage to your engine. The following instructions do not guarantee success, read them over carefully, determine that you really can tackle this project then proceed at your own risk.

The photo (left) shows the difference between the stock extender (still mounted on rod) and the new longer unit you'll be replacing it with.

This is a non-return type cam chain tensioner. The push rod does not return to its original position once it moves out to take up camshaft chain slack. Observe all rules listed below.

Both front, and rear cylinder's tensioners are identical, however the front one is more difficult to work on.

I won't go into the difficulty of accessing the front tensioner assembly, except to say that if you have the original air cleaner and intake crossover on your bike, there is VERY little room to remove/install the front tensioner. Those who have replaced the OEM filter with an aftermarket filter, mounted on the right side, have had much less trouble.

* Loosen lockbolt. (This is a small 8mm hex head on the outside of the tensioner body).

CAUTION, there are several spring loaded parts inside the cap.When removing the cap, carefully ease the cap away from the tensioner body, so these parts don't go flying all over the place. Take note of the order and position of each part to help with proper reassembly.

Remove the two allen head bolts that hold the tensioner body to the cylinder. There is an O ring that seals the cap, and a gasket.

The O ring should be reusable, just don't loose it. If you're careful, you can reuse the gasket too. I have never needed to buy one yet, but if you do, the part number is: 11009-1858

. In a pinch, I suspect that a thin layer of silicone gasket maker could patch, or replace the gasket.

WARNING! AT THIS POINT, DO NOT MOVE THE CRANKSHAFT!

* Removal of OEM extender rings from the push rod.

Examine the tensioner body/push rod assembly, and determine how the sear/ratchet mechanism works.

If you push the spring loaded sear towards the gasket surface, you will be able to retract the push rod into the tensioner body. This will be necessary for reassembly, but for now, just figure out how it works, and then extend the push rod to it's longest position. The original tensioner ring is pressed onto the push rod, and must be removed before the new ones can be installed.

I place the ring in a bench vise, and use a hack saw to cut ALMOST all the way through the ring. Then use a straight blade screwdriver in the saw cut,and break the ring, then remove. Try not to mark the push rod itself, or the tensioner body with the saw.

WARNING!
Due to slight variations in push rod diameters, some extenders will slide on easily, while others will be a slight press. The extender is captive once installed, but it is possible to drop an extender into the engine while installing it. This could require engine disassembly to recover it!

BE SURE TO USE LOCTITE.

Use red high temp Loctite (remember the warning above to keep Locktite off of the sear mechanism and teeth) and slip the new extender in place on the end of the push rod.

On some push rods, the extender will slip on easily. On others, it may be necessary to use a lead hammer, or carefully put the assembly in a bench vise and use the vise to seat the extender.

** Do NOT apply force to the body, which will damage the sear. Retract the push rod, and only press against the rod ends. If using a vise, use rags to pad the push rod ends, to prevent damage.

* Prepare the tensioner for reassembly.

Disengage the sear, and retract the rod into the body as far as it will go. Reinstall the large spring, and the ball bearing. Compress/bottom the spring/bearing using a small screwdriver, and hand tighten the set screw to hold everything in place. The set screw does not lock against the side of the ball bearing cage, but hooks the cage and spring below it in the bottom.

Install the bearing retainer, which looks like an outer race for the bearing.

Install the body on the engine, while taking care not to bump the push rod, as it will extend. On some engines, spring resistance will be felt while bolting the body back onto the engine. One, both, or neither of the cylinders may exhibit this slight spring resistance, depending on where the engine stopped when last shut off. Be sure the tensioner is as short as possible, and use the mounting bolts to overcome the slight resistance.

Why does this happen, you say???? The engine has stopped at a place where some of the valve springs are pushing the cam chain slack to the other side. This is not a problem, again, just be sure that the assembly is as short as possible, bolt it on, and torque it. When the engine first turns over, any chain slack will move to the back, and the tensioner will adjust correctly, eliminating the slack.

Don't drop the bearing retainer, which is just slipped on at this point. Use new gaskets/and or silicone, if you want to make sure of no oil leaks. Torque allen bolts to 87 INCH pounds. Once the body is fully seated, push the tube into the cylinder.

Loosen the lockbolt, and back it out a 1/4 inch or so. You should hear a click as the large spring seats.

Tighten the lockbolt to 43 INCH pounds.

Rinse, and repeat on the other cylinder.

Thanks to Tim (Snake) Acree (RIP)