Replace That U-Joint Without Breaking The Bank

The need for U-Joint replacement on shaft drive bikes like the Vulcan 1500/1600's usually becomes apparent in one of two...oops, make that three ways. 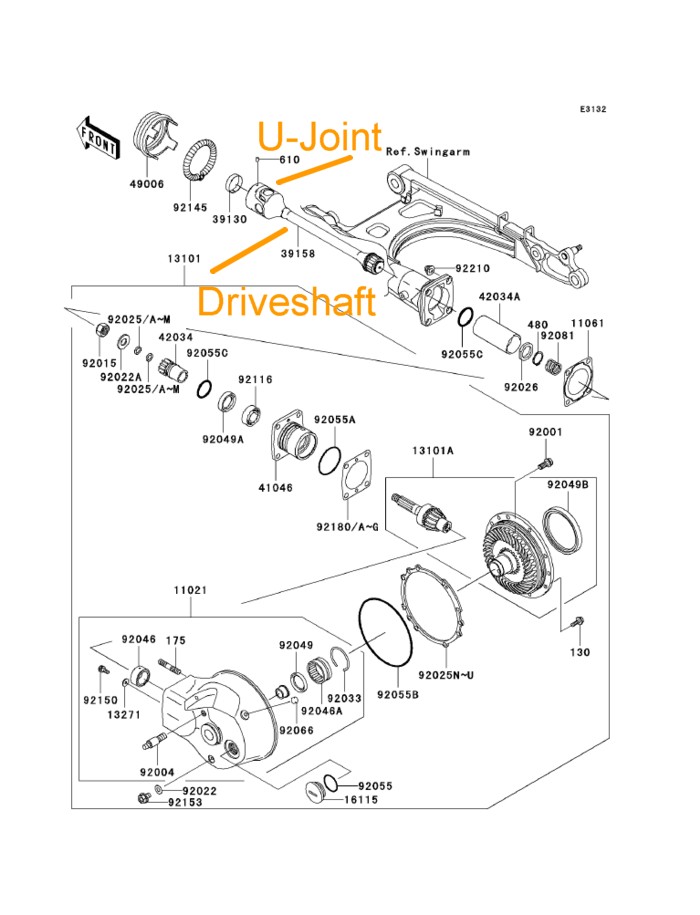 If you've experienced any of the above you've probably called your local Kawasaki dealer to price a new U-joint only to be told you can't buy it separately, Kawasaki only sells it as a part of a whole driveshaft and that assembly (see photo right) is going to set you back a cool $240 (best price I could find at Ron Ayers). There goes the rent money.

Well cheer up, there's another fix that your dealer won't tell you about, probably because they don't know about it.

Once you have your new U-joint and snap rings in hand there are two ways to remove and replace the old one.

When everything is apart you can re-assemble in pretty much the reverse except the use of a punch won't be required. Place the spider (center part of the U-joint assembly) in the driveshaft yoke and press in new caps as far as you can with your thumbs. Be sure the needle bearings stay against the walls of the caps and tap the caps gently into place using the small hammer/socket combo shown above. Most replacement U-joints will come with a zerk fitting for lubrication. If you haven't already put the fitting in place do it now and inject some grease. In the future you'll be able to pull the dust boot back and lube the joint no muss, no fuss.

Before you put the circlips back in make sure the assembly is moving freely, no binding in any direction. Add the circlips and check for binding again.

Now, while you have everything apart and the swingarm off the bike would be a great time to lube those swingarm bearings. When that's done re-assemble your bike and go ride. Enjoy the lack of vibration for the first time in probably many miles.