The most used products for the Kawasaki Vulcan come from:

The above lifts will work just fine out of the box but the side lifting the front of the Vulcan will be lifting the engine rather than the frame. This isn't always desirable (for instance, when you're trying to remove the engine) sooooo. Check out the designs below. They can be cut from 3/8" steel with a bandsaw, cutting torch, laser sword..take your pick. This pattern works with the Larin lift for Vulcan Classic, Nomad and Drifter. 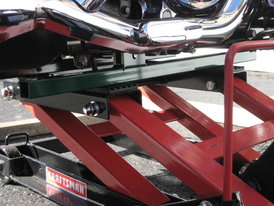 Tired of trying to lift your 1500/1600 Vulcan Classic or Nomad with a MC jack pushing on the bottom of the engine case or balancing everything on hockey pucks or wood blocks? When I bought my Nomad I quickly found that the Craftsman jack that worked so well on my Suzi Volusia put the Nomad on a teeter totter. Not good. So I worked with my machinist and we developed an adapter frame to allow the standard Craftsman type MC floor jack to securely lift my beloved Nomad.

The Idaho Jack Adapter has tabs with holes drilled to match the holes on the Vulcan frame tabs. The adapter is held in place with large nails, or screws if you prefer, and the front of the adapter is lifted to snug up against the Vulcan frame with a coat hanger or rope. Then the bikes wheels are rolled onto ¾ inch plywood squares and the jack will then slide right under the bike.

This adapter is long enough that you can move the jack to the back of the bike to lift just the rear wheel or move the jack to the front of the bike to lift the front wheel. Somewhere in between you can find the balance point to securely lift your Vulcan straight in the air with no rocking what-so-ever. You should be able to find a balance point even if you have a trunk and or fairing and lowers.

The cost is $60 delivered to anywhere in the lower 48 states, $75 (usd) shipped to Canada. The adapters come in any random color but black because they are too easy to leave on the bike as it is. So, why pay as much for this adapter as you do for your lift? Because this adapter will ensure that your Vulcan sits solid on the jack. A small price to pay to protect your ten or twelve thousand dollar investment.

Idaho Jack has stopped making the adapters, but Chuckster (Joe Norris) has continued making them from Bud's pattern. You can order these online from Chuckster's Customs.

When you purchase your HF lift it will come with an "H" plate/adapter which is probably helpful if you're lifting an auto transmission. What? You want to lift a motorcycle with it? No problem. Grab the old Dremel tool and a hacksaw and lets go to work.

DO NOT decide to glue the adapters to your jack. I did this (smart alek) and only discovered after the glue dried that, with adapters in place, the jack won't roll under the bike. DOH!