So, the weather outside is frightful and your hands are cold no matter how heavy the gloves.  You've looked at aftermarket wind deflectors for cruisers and they all look like they belong on a dirt bike...sort of home made and besides, they can cost big bucks!  Well now you can have a set of home made deflectors that look like they came from the factory thanks to Scott Harns.

He has done all the pattern making (as you'll see) and picture taking.  Now all you have to do is follow his lead.

These are the patterns you'll be making:

In the first photo 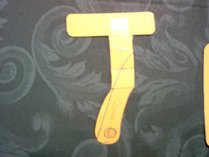 you see the first attempt at the bracket. Not so good but a start

The next photo is of the 2nd generation bracket..

..more curved and longer...getting there...a few bristol board patterns (paper was used for the first few in white) were done and checked on the bike to see if they would be long enough
the right curve etc.

Next you see the cardboard mockups.. 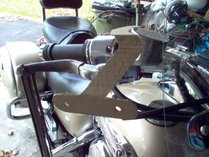 .well...this step allowed me to make a stiffer set of patterns that I could bend (and they would hold there shape) while I test fitted them onto the bike. A good practice is to use an xacto knife to do this and to have a few layer under this if your going to go at it on the wife's dining room table.

I then began making the form for the Plexiglas deflectors themselves. This took some practice as I used the cardboard mockups and a piece of bristol board cutout to ensure the size and the pattern layout looked OK and not too big...but big enough to deflect the wind (time will tell if I am right) but a new pattern or another plexi piece cut out is not hard...Oh and I used 1/8" which is more than adequate. So to was it used (1/8") for the steel brackets as well.

After getting the Plexiglas cut out I left the paper on till I was sure the angle and the placement of the drill holes were close to what I wanted.

Next I went (no photo of the process sorry) into my workshop with the brackets and my cardboard mockups and placed the brackets in the vice while I checked the patterned mockups for the right position and angle of the bends...I took 2 hammers..1 above my blows area and the other larger ball peen hammer I stuck the area that I wanted to bend...hold the other on the above bracket above the vice to keep the vibration down and to deliver the blow to the area I wanted to bend... once it was done close to what I wanted I took it out and used the backside of my vice (like an anvil) and flattened the pieces where it needed to be. Don't worry if you over bend it, you can bent it back and if not enough bend it some more...it is not that hard REALLY!!!.

(easier to remove the mirrors as they hit rotating them off) and then put the brackets (with drilled holes etc) onto the mirrors and re-tightened them down and checked... I had to use my large set of adjustable wrenches to grasp the bracket secured in the mounted mirror head and twist it a little...this was not a major adjustment but tried to make it more functional and aesthetically correct...

Once this was done I was ready to make my aluminum fronts for the Plexiglas to be sandwiched between. I had some scrap tread plate so I used it

the same shape as the rear brackets.

I had some hex key head bolts and in my junk drawer found 4 lock nylon nuts and some washers just the right size.  Sandwich a piece of old bicycle inner tube between the bracket and plexi to prevent cracking.

You may not like the appearance of plain old flat Plexiglas. No problem. You can use a heat gun to slowly heat 1 side then the other to shape it... once you have the deflection you want let it cool and your done.

N>ow it was on to re-assembly for a final fit and then de-assembly final sanding of the brackets ( and take any rough edges away) and then paint and DONE!!!

Hang your patterns someplace safe for next time or for when a friend wants to borrow them.

This project took me a few days as I did it an hour or so each night after work (I work later so not as much time)...so if you had gathered the pieces and make the brackets in your spare time. You can make this start to finish in a few hours or 1 day...plus paint and drying time.

It mounts exactly like Scott's bracket except no curves. Just bend a piece of flat stock 90 degrees, drill a hole for the mirror mount (11 mm) and a couple of holes to mount the plastic and you're done!