For some riders 1600 Nomad feels like it's leaning a little too far when on its side stand. Below you'll find several solutions. Check all options before proceeding so you can decide how much lean (or lack of) you're willing to accept. The host of this site and those providing tips aren't responsible if your bike falls over because you used a stand too long or too short.

Thanks to Jim (Moondog) Kelly For This Mod

Jim always used a 2x4 under the stand when parking in the garage. Once he added a fairing and a trunk the bike seemed to lean even further, threatening to fall over. The fix? Simple, just swap out the Nomad kickstand for one off a VN800a which is longer. If excessive lean is a problem you've encountered then follow the simple instructions below.

1- Kickstand from a Vulcan 800a part number 34024-1327, about $55 from a dealer, a fraction that from a motorcycle salvage maybe even a freebie if someone on a Vulcan list or forum has a spare. 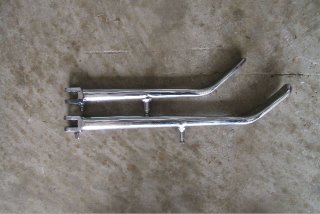 First of all notice the difference in length between the two kickstands (photo left)? The Nomad is the shorter one, the VN800a the longer.

Before installation you'll have to modify the new kickstand. 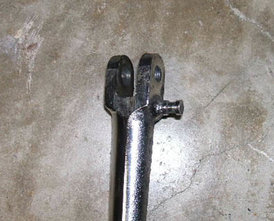 Using a Dremel cutting wheel, chop saw, hacksaw, grinder or whatever you have cut the tab off the new kickstand next to the pivot bolt hole and replace it with a welded on bolt as shown in the picture (right) so the kickstand safety switch will operate properly. Use your old kickstand for measurement.

Without this modification the bike will think the kickstand is in the "down" position so will kill the engine anytime you put the bike in gear. Not terribly practical.

The next modification is optional. Note the bolt hanging off the bottom of each stand in the picture above. It's the bolt the kickstand spring attaches to. If you remove that from the new kickstand then move it "in" toward the pivot to match the original 1600 stand location you can re-use your original spring and won't have to stretch the spring nearly as far when re-assembling. You can weld a new bolt to the stand or drill the kickstand and put a bolt through it to hold the return spring. If you choose not to do this you'll need a kickstand spring from a VN800a as shown in the parts list above.

The photos below show the original Nomad kickstand in place (left) and the new longer VN800a kickstand (right) which is about 3" longer. Don't forget to grease the bolt before installing.

The final task is installing the spring. Some consider this the most difficult part but here's a helpful tip. Bend the spring 90 degrees (you might have to stand on one end and push the other end over a curb with the other foot) and insert pennies between each coil. Now let the spring come back to it's normal position and it'll be substantially longer. Hook the spring over the kickstand and frame hooks then extend the kickstand. Most of the pennies will simply fall out. Easy eh? 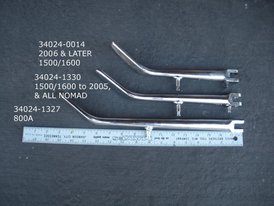 Rich Lockyer writes: I tried the 800A sidestand mod (above) on my 1600 Classic and it was too long. On level ground, if I turned the bars to the right the bike would fall (no, I didn't let it fall). I researched part numbers and it seems that Kawasaki changed to an even SHORTER stand in 2006 on both the 1500 and 1600 Classics (actually 2005 on the 1500), but they kept the same stand on the Nomad and the Mean Streak. 2007 and 2008 show a new number for the Mean Streak, but the length seems to be the same on those in the showroom. See picture above for reference.

It would be nice to have a LITTLE more, but the -1330 stand from the Nomad is a lot nicer than the stock stand on the 2006 and newer 1600 Classic, and is probably a good mod on the 1500 Classic as well. The same spring can be used, and the sidestand safety interlock still functions as the pins and their spacing is unchanged as you can see from the photo (above).