I spent some time looking at the make-up of the bladder - I referred to Gadget's page but the how-to there shows a different bladder with a slightly different lay-out. Here's a guide to gutting your catalytic converter on your Vulcan Mean Streak.

I looked inside as much as possible using a torch and worked out where the wall holding the honeycomb was fixed - I could also see the weld marks on the exterior. I then marked up where to cut. I used an angle grinder to do the cutting, a dremel cutting wheel lasted about half an inch so although it cut much neater than the angle grinder it wasn't really up to the job.

So, first job was to cut around the side of the bladder, this pic shows the cut section and it's useful as a guide to anyone wanting to know where to cut.

Cut section removed allows the first sighting of the honeycomb: 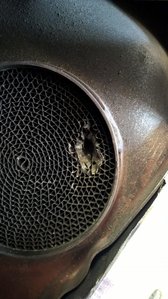 To start removing it I bashed a hole through it with an old screwdriver, it's thicker than I expected at around 1.5".

I kept chipping away at it, pulling out bits with a pair of long nosed pliers, twisting around rather like opening a tin of sardines. It took a fair while to do it this way. I changed tactics and used my screwdriver to force between the honeycomb and the circular hole it sits in. After getting about half way around I was able to twist the hole thing out of the hole and ended up with this:

which left me with this in the bladder: 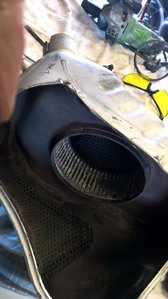 I cleaned up all the edges and it's now ready to be re-welded together.
Job done, time for a cup of tea :-)

Tuesday, April 24 2018 @ 03:13 PM PDT
Hey man. Excellent write up. I have checked in the past the original write up on Gadget web site but this makes more sense to me to just remove the convertor media. So the objective of doing this to change the sound of your pipes. Correct ? Are you gonna gain any more power ?
Cheers
Mic

Tuesday, April 24 2018 @ 03:38 PM PDT
You won't see any more power. Back pressure may be reduced, but I don't think by very much if you just take out the internals- still lots of bends & twists for the exhaust to follow.