Memphis Shades Shield & Kawasaki Light Bar It Can Be Done

Every so often this question will arise:

Is there a windshield that works with the Kawasaki / Jardine Billet light bar? I even asked the question about two years ago. The answer is YES, but slight modifications are needed.

Based on looks, styling options, reputation and Nationwide availability I wanted Memphis Shades. The problem was that all the companies involved say it wonâ€™t work and that none are designed to be used in combination. Well, that little comment made ME say, "If there's metal involved, I CAN MAKE IT WORK!"

I had seen some previous posts on VROC where others had also made this combination work. Thatâ€™s a scary thought after dropping $100.00 or so on mounting brackets alone, the fact that you are about to perform surgery on a new part is intimidating!  While none of the previous posts were specific as to what had to be done, I discovered that it was actually pretty minor and easy.

After my successful installation I contacted Jardine (They make the FS Billet light bar) and Memphis. I provided them with the step-by-step instructions as well as the photographs I had taken at each step. (Sadly the computer that had all that information on it has since died.) I BEGGED, PLEADED with Memphis to do this mod at the factory. They never responded. Jardine did! They were more than rude and for no reason. The mod DOES NOT affect their product AT ALL! It is a total of four cuts on two of the Memphis brackets. Because of the quality of materials and craftsmanship by Memphis THIS WILL NOT AFFECT stability or strength! Memphis Shades makes a QUALITY product using GREAT materials!

This Mod WILL VOID ANY RETURN OR PRODUCT WARRANTY!  Know that going in!

All that said, here we go:

Forgive my terrible drawings and hopefully they havenâ€™t changed the style since, but you should get the idea.

The only brackets that need to be changed are the brackets that mount to the forks. The â€œhooking bracketsâ€ for the shield stays unchanged. Itâ€™s not hard at all and can be done in less than 10 minutes using a hand grinder.

The important part is to make sure that they are stacked in the right order!

From the Bottom working UP:

Looking directly at my brackets they resembled this: 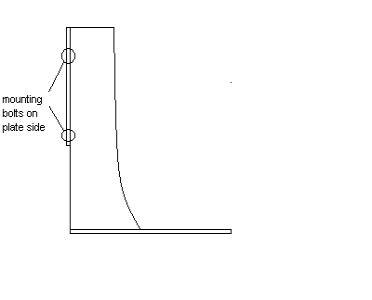 Now cut it and don't worry! I have gone 110mph on my bike for 75 miles and the shield held up far better than I did! 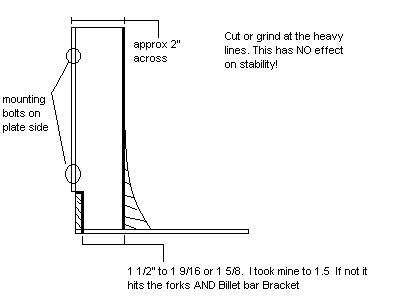 Once all back together, if it won't fit: Take a rat-tail file (small round) and hit the BOTTOM portion of the TOP mounting hole 1/16- 1/8" to take it out of round and make it SLIGHTLY egged shaped.  If the hooking brackets now POP in, you did it right!