I've heard it said (by my sons I'm pretty sure) "Dad, if it's too loud you're too old". Now, there's no getting around it, I'm beginning to add on some years but I really don't think it has all that much to do with my opinion that Vance & Hines Baggers are just too loud for a touring bike like the Nomad. After a couple of hundred miles you'll be able to trace your headache and general fatigue directly to the pipes.

On this page you'll find three ways to quiet the V&H baggers. If you want to skip the preamble, sound comparisons and explanations go directly to the 'baffle extension fix' or to 'Wompus' baffle mod' or to the super simple 'no welding slip on' just click the links.

By Gadget, based on an original mod by Slim and Another Way To Go from Wompus, creator of the Wompus Rack. Then a Variation On That Theme From Scott Lidstone & at the bottom, the simple slip on solution. 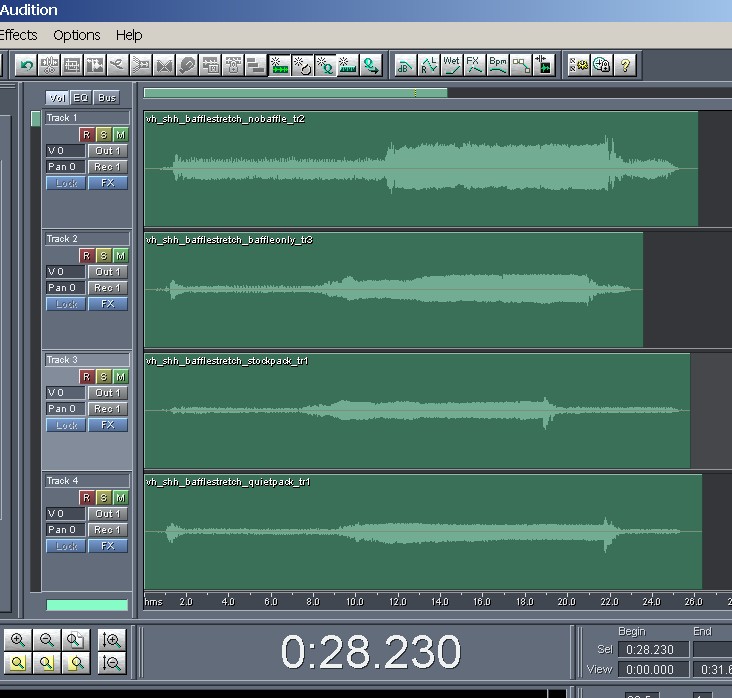 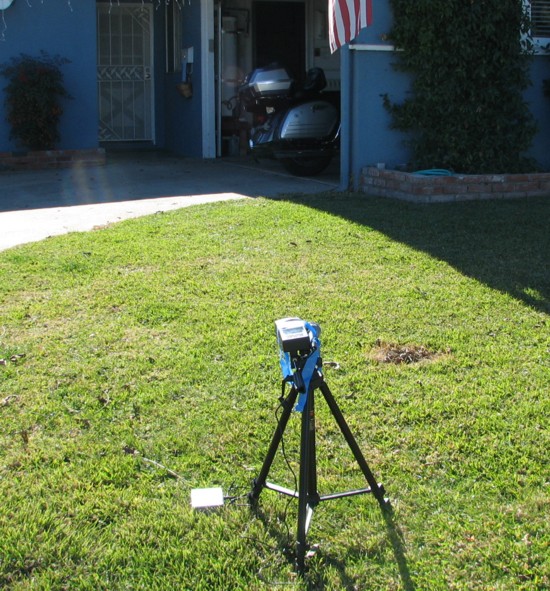 What you see above are waveforms recorded digitally on a Sony Minidisk recorder/player with the microphone 25 feetaway from the bike, a standard distance used by the DOT and many police agencies to determine whether you're exceeding the 85 decibel noise limit. On the same tripod with the microphone was a Radio Shack decibel meter set to the "A" scale (most akin to what the human ear hears). Scientific? Not by a long stretch but it 'is' a direct comparison between straight pipes and baffles modified in various ways. In all cases the baffle has been stretched seven inches from the one supplied with baggers so you can safely assume the numbers shown are quieter than V&H baggers out of the box.

Click the waveforms below to hear each track. Everything was recorded at exactly the same level. As you'll hear in the sound sample and contrary to what the numbers show, the "Silent Sport" packing is quite a bit quieter to the ear at highway speeds (under load) but seems to have a bit more bark when rolling on the throttle than the standard packing material.

Here's a scale of sorts so you can judge the actual sound levels;

As it came from the factory the Nomad is a very quiet bike, some say it sounds a little like a vacuum cleaner going down the road (I'll try to get a DB reading of a stock Nomad and add it to the page).

At nearly zero miles I removed the goat belly (catalytic converter) in favor of a which is, unfortunately, no longer available. It was a pass through pipe that completely replaced the goat belly. It added a bit of rumble without adding much (if any) volume. It was a great setup for more than 50,000 miles. The intake was also almost totally stock (except for a K&N stock replacement air filter) for most of that time. Then I switched out the stock intake for a Caddman Mod then swapped that out after a few thousand miles for a Thunder intake and finally, what the heck, out with the stock mufflers and on with a set of Vance & Hines Baggers found for a bargain on E-Bay. I mention the mods only because each of them increased the bike's noise level a little.

I mounted the Baggers up in an afternoon, fired up the bike and thought to myself...."self, that is really loud". My thoughts were echoed almost immediately by the bride of 30+ years who wandered into the garage long enough to remark "wow, that is really loud". Message received, loud and clear. Still, I rode with the baggers stock for a couple of weeks to see if I'd get used to them. I didn't and it was mod time.

So, if you have baggers on your Nomad and that odd resonance at around 3000 rpm ( 70 mph ) bothers you or you feel self conscious while riding in traffic read on. If not...well more power to you. You just aren't as old as me. <grins>

If you've ever removed your V&H Bagger baffles you've noticed they're only about 12 inches long. You have about 7.5 inches of empty muffler canister in front of that baffle that can be filled and that's what we're going to do here. If you or a neighbor has a bandsaw that can cut metal I strongly strongly strongly suggest you take advantage of it even if it costs you a bottle of the neighbors favorite adult beverage and some time cleaning up the small mess you'll make in his workshop. If no bandsaw is available then you, like me, are reduced to using a good old hacksaw and a file to undo the crooked cut you're going to make. As mentioned in the 'things you'll need' section, you can also take the pieces to a muffler or machine shop and have them make the cuts and do the welding for you. 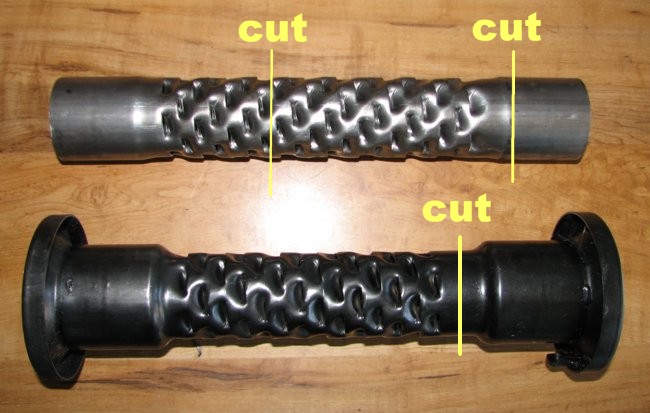 Go ride! You'll discover your baggers are not suddenly quiet by any stretch of the imagination but almost all of the off throttle 'blat' and strange vibrations at cruising speeds are gone. Heck, you can darn near hear your MP3 player now! And if it's still too loud? Well, maybe----you're too old <grins>

Gadget Note: Wompus' method is actually simpler and all you'll need is a hacksaw and some fender washers. Sound good? read on.

Last month I went to Gadgets page to find some help in making my Dual Baggers more quiet on my Nomad. I did the 6 inch extension on the baffle, added new fiberglass packing,, 2 layers,, and for some reason they didn’t sound as quiet as before.

After doing the mod I was at a motorcycle gathering, my Nomad parked next to another with V&H baggers, both idling and mine was louder!! Seems the new double layer of packing was too tight and the fiberglass wouldn’t absorb any noise inside the muffler.

I was reminded of an old trick Street Rodders used to do to quiet down the straight pipes on their cars.Change the airflow coming through the pipes!I remember doing that to my own car many years ago so I decided to try it on the Baggers. 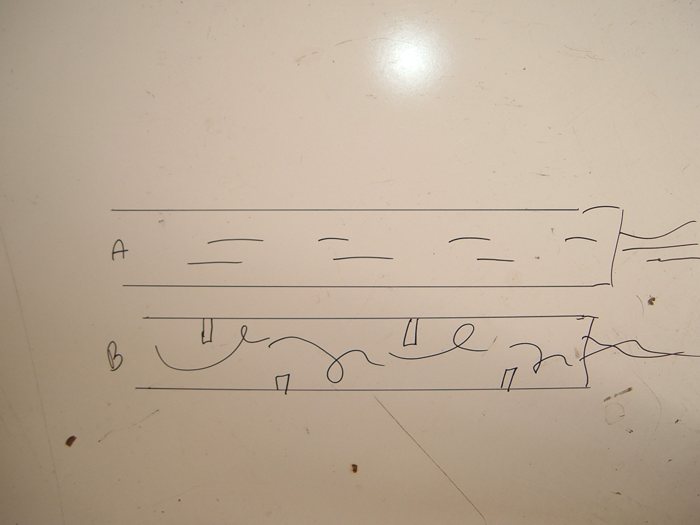 This diagram (A) shows the V&H exhaust flow through the standard baffle (even the stretched one above) The drawing (B) shows the flow after you've added your "baffle baffles".

Please note for the photos a plain piece of pipe has been used to show how it was done. You'll be doing the same but to your V&H baffles. Ready? Let's do this!

The sound is much more lower then the Baggers yet still enough of a rumble to sound great!

Expanding On The Theme 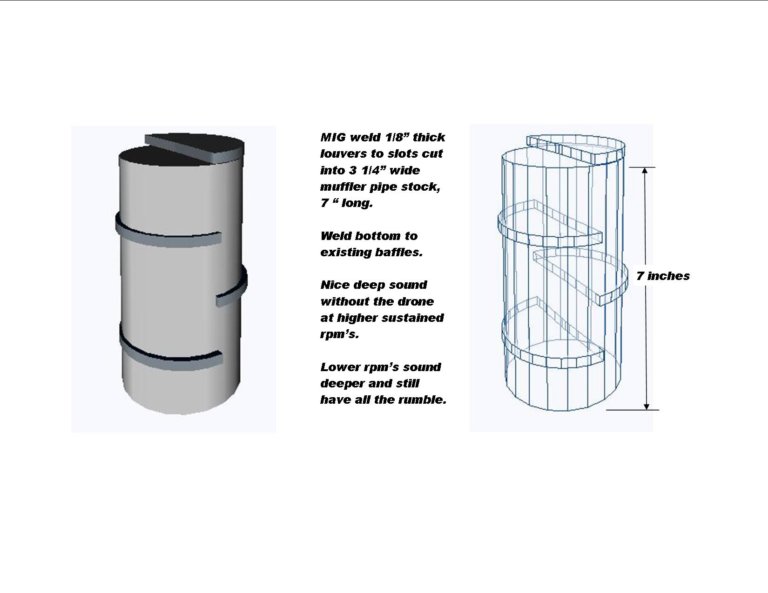 Scott Lidstone did something similar to the Wompus method above except he cut the slots and welded hisdeflectors into a scrap piece of exhaust pipe.

He used 2 pieces of 7" x 3 1/4' exhaust stock pipe (thanks available in any exhaust shop dumpster) and some 1 1/2" wide x 1/8" stock from Home Depot for the louvers (similar to the washers used above).

Scott cut the half circles using the pipe for a template with a jigsaw and cut slots in the pipe to receive them.. (make sure you use a metal cutting jig saw blade or it will be a very, very long day..)

When finished you just weld the new extensions to the existing baffles.. When they're welded just slide them in and start your scooter.. You might want to start with two louvers and if the exhaust is still a little loud add another. Scott did exactly that end ended up using four to find the clean deep bottom end and quieter exhaust at cruise speeds he was looking for.

This may be the easiest packing method of all. You just need a few feet of "stove rope 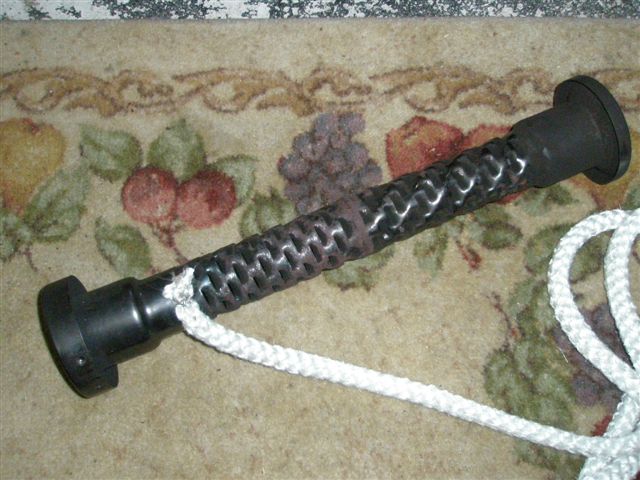 As shown in the photo (left) start by clamping the rope to the end of the baffle using stainless steel utility wire. Wrap the rope 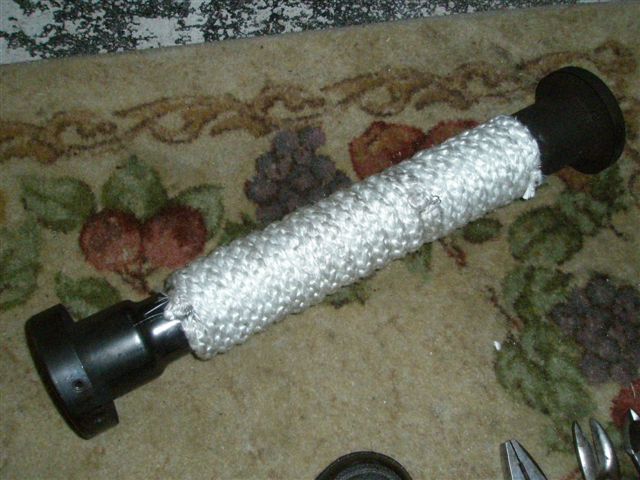 tightly around the baffle then secure the other end with wire.

When finished you'll have something that looks like the picture at right.

Slim says he's been running this way more than a year with absolutely no deterioration in the rope and...he says it sounds great!

The Super Simple Slip On Method

You've probably heard Harley touring bikes rolling down the road with stock mufflers (yes, there are a few) and enjoyed the muted rumble. Maybe you've even wished your Nomad could sound just like that. Well, it can and it's simple. Since you have V&H headers on your Vulcan already you can just slip on a set of HD mufflers. You can pick up a set for around $20 off E-Bay.

Here's the good news. There's no welding required. In fact a hacksaw and electric drill is all you need.

Fire it up and go for a ride! You'll appreciate the rumble but lack of roar from the stock HD pipes especially if you pull a trailer. You still have your V&H mufflers you can easily slip back on for those times you really want to be 'noticed'.

Bonus Item For Those Who've Read This Far

(shhh, don't tell anyone this tip is here..it's a prize just for you)

If you tow a trailer you know the sound of the exhaust tends to bounce back forward to the bike, and after a few hundred miles will drive you bonkers!!

Wompus went to the local AutoZone and bought a couple of 2 ¼ diameter chrome turn downs and after cutting a couple inches, and the screw tabs off inserted them into the tail pipes. They'll slip in beautifully (like the proverbial glove). Turn them outwards or down if you like stirring up dust as you roll down the road and weld them into place. Either way you'll now have the exhaust sound traveling outwards instead of back to the trailer.